If you're someone that thrives above 2000 metres, there are 253 reasons to visit Jotunheimen! Jotunheimen boasts Norway's highest mountains, some of Norway's most popular mountain routes and amazing adventures for all.

It was the poet Aasmund Olavsson Vinje, who travelled extensively in the area in the 1860s and had a cabin at Bygdin in Valdres, who first christened this place Jotunheimen. In Norse mythology, the Jotun were giants - trolls - who lived in a place called Jotunheimen.

In wintertime, Jotunheimen and Sjodalen are exceptional skiing destinations, with peaks such as Besshø and Høgdebråtet, or Høgruta (the high-level route) in Jotunheimen starting in Sjodalen. Cross-country skiing is also superb. You can strap on your skis in the valley and take the cross-country trails past Lemonsjøen, through Sjodalen and into Gjende - in the heart of Jotunheimen. You'll find great places to eat and stay along the way.

Lemonsjøen has the country's most charming ski resort, which has nurtured some of the world's most awesome skiers.

As the spring skiing season approaches, many Norwegians make the pilgrimage to Jotunheimen and Sjodalen. With its stable climate and conditions, Jotunheimen has become one of the most popular areas in the country for alpine touring and off-piste skiing.

Jotunheimen has an extensive network of walking trails and is excellent for hiking, from short family-friendly walks, mountain hikes and mountaineering, exploring glaciers and rock climbing, to multi-day cabin-to cabin expeditions. Click here for more about hiking routes in Jotunheimen!

Jotunheimen is bursting with opportunities for fishing and hunting for small and large game. Local restaurants often source their raw ingredients directly from nature's very own pantry. The trout are eager to bite in the streams and fishing waters; in autumn you can pick berries and mushrooms; and reindeer, moose and grouse thrive in the mountain landscape.

Besseggen ridge is considered one of Norway's greatest mountain hiking routes, with some believing it should be compulsory for all Norwegians. About 60, 000 visitors walk Besseggen each year. The views are magnificent, with steep mountainsides surrounding Lake Gjende's green waters and the majestic Jotunheimen as the perfect backdrop.

Along the newly-marked “Historic Hiking Route Jotunheimen” you will experience the very best the Norwegian mountains have to offer. It follows in the historic footprints of Peer Gynt, Jo Gjende, Edvard Grieg, Edvard Munch and many more celebrated Norwegians. 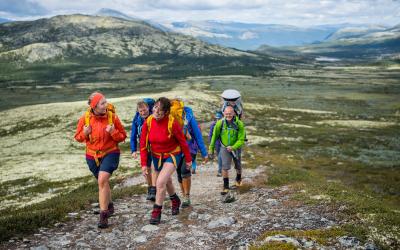